The highly successful first leg of the OVI clean-up expedition included collaborating organizations such as NASA, Smithsonian, Scripps Oceanography, University of Hawaii, and University of Washington. The expedition returned to Hawaii from the North Pacific Sub-Tropical Convergence Zone on June 23rd, pulling 103 tons of fishing nets and consumer plastics and having set a record for the largest open ocean clean-up that has ever been done.

The missions are coordinated by Mary T. Crowley, Founder and Executive Director of OVI based in Sausalito, California. Crowley is also a founding member of the Mission Resolve Foundation, and, for over a decade has been internationally recognized as a pioneer of large-scale clean-up of toxic plastic in our oceans. “We know existing maritime equipment can be used successfully by re-purposing and innovating to accomplish extremely effective clean-up of the proliferating poisonous plastics in our global ocean,” says Crowley.

This $25,000 matching challenge grant donated by Mission Resolve Foundation provides necessary funding to help make additional voyages to the Gyre possible and enables OVI to increase the amount of plastic it is removing from the ocean this year. Plans are currently underway to deploy Mission Resolve Foundation’s 216-foot Humanitarian and Environmental Response Vessel, the Lana Rose, in OVI’s 2021 clean-up expedition. This will significantly scale these marine plastic clean-up operations and make an even greater impact. The Lana Rose will also provide extensive media and educational components including live virtual field trips for these ongoing expeditions through an onboard broadcast facility and live streaming capabilities.

Mission Resolve Foundation organized the first virtual marine field trip with the Ocean Voyages Institute team in Hawaii and New River Middle School students and teachers in Broward County. The need for virtual marine education programs like this is vital right now with the uncertainty of when schools will return to the classroom.

Resolve Marine was contracted to clean-up over 2 billion nurdles that spilled from a cargo ship. These beads are the raw product for just about every plastic product we use. They are about 5mm in diameter and they partially float. Resolve Marine was contracted as advisors during the cleanup operations, providing guidance, technical support, and methodology, as well as liaising with the local coast-state maritime and environmental authorities and overseeing the HazMat beach cleaning teams.

This project started with bead pollution in the Durban Harbour and Durban beachfront areas but after Resolve implemented a beach inspection protocol which embraced the original storm drift analysis, ROV techniques, and aerial surveillance, it was soon realised that the project needed to be rapidly extended to the Northern coastline for many hundreds of kilometres  Beaches were inspected from the border with Mozambique, and then all the way South to the Cape – well over 1,500 Km walked!

These Nurdles were removed from beaches, harbors, and lagoons using manual labour forces – using simple sieve technology in the environmentally sensitive beach and lagoon areas – as well as Resolve designed permitted mechanical techniques. The remote locations had some of the highest concentrations of beads. Small mobile teams worked on the lagoon shorelines with no road access, no shops and no support. Everything the team needs has to be brought on 4×4 vehicles. 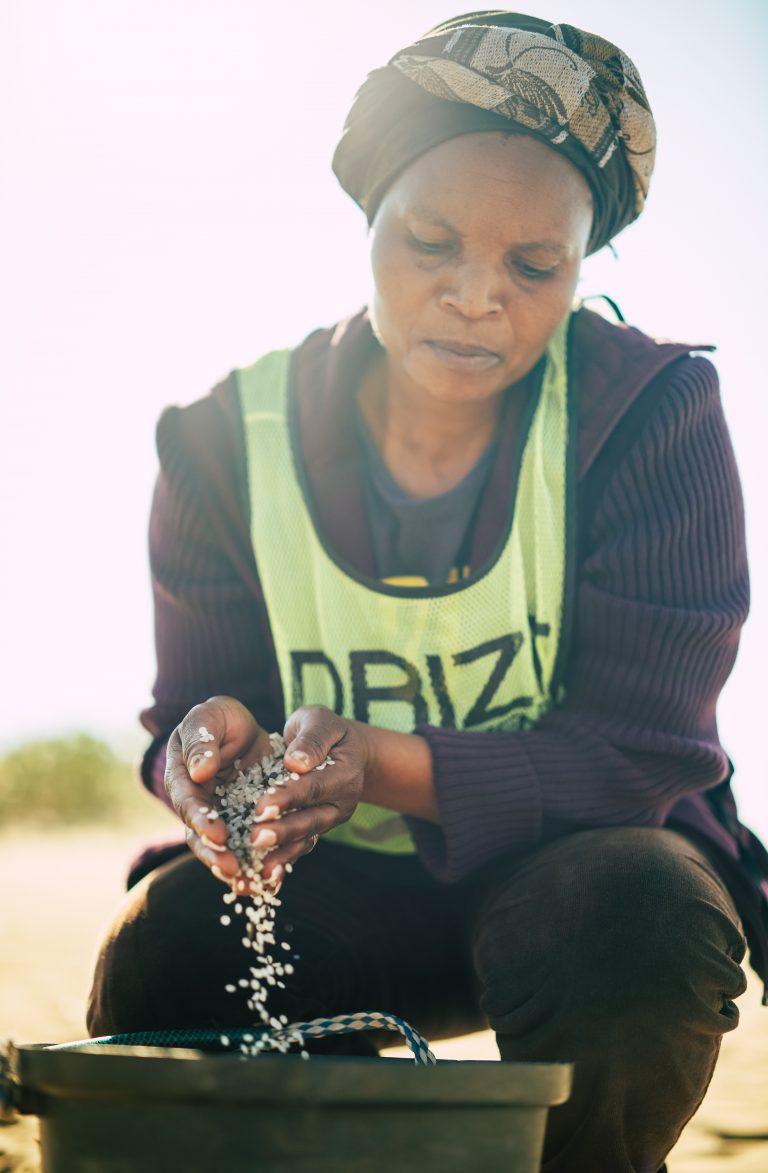